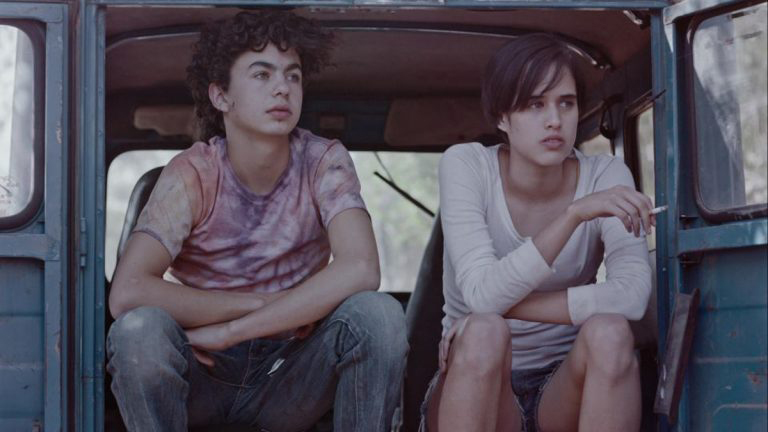 Scriptwriting For Working With Non-Professional Actors

Please join us for a workshop on scriptwriting and working with non-professional actors in non-fiction films. FSC fellows Khary Jones, Karthik Pandian, and Dominga Sotomayor, together with visiting filmmaker Adirley Queirós, will show excerpts of their films and talk about how they use writing in particular ways in their work. The conventions of scriptwriting are almost exclusively centered around the idea of writing for fiction, but when you start filming, you’re in a different place, a site for an encounter with the real and with the people you film. We will discuss why writing for hybrid works and how to write a film to let reality and chaos in, do away with your script, and start over the first day of shooting. We will focus on writing for hybrid works between fiction and documentary and how writing can be integrated when working in non-fiction films and with non-professional actors. An open conversation prompted by the questions introduced by the filmmakers will follow.

Khary Jones engages film projects that explore the tensions between fiction, memory, and everyday life.  His films and collaborations have screened at Sundance, SXSW, MoMA, CIFF, Full Frame, ICA Boston, and many other festivals and venues.  As a writer-director, his work includes the short films Hug, Three and a Half Thoughts, Chrysalis, and the forthcoming feature-length films Night Fight and Gumbo. Khary studied at Columbia University (MA, MFA) and Morehouse College (BA), and he is currently a Professor of the Practice in Drama and Film at Tufts University where he teaches storytelling for the screen and advises students developing both scripted and documentary projects from inception to edit.

Karthik Pandian is an artist who works in films, exhibitions, and public interventions to unsettle the ground of history. He uses moving image, sculpture, and performance to render the mythologies of the present through forgotten, fragmentary, and futuristic pasts. Karthik has held solo exhibitions at the Whitney Museum of American Art; Bétonsalon, Paris; and Midway Contemporary Art, Minneapolis amongst others. Pandian is currently at work on a feature film – Lucid Decapitation – supported by a 2022 Creative Capital Award as well as a public performance in St. Paul produced in collaboration with Mike Forcia and Midway Contemporary Art. He teaches in the Department of Art, Film, and Visual Studies at Harvard University.

Adirley Queirós is a filmmaker from Brazil. His latest film, Dry Ground Burning, premiered at the Berlinale Forum in February 2022, won the Grand Prix at Cinema du Reel, as well as the main awards at Indielisboa, Athens Film Festival, Dokufest, among others, and is now being shown at TIFF and the NYFF in North America, where it will be distributed by Grasshopper Films. Adirley has previously written, produced and directed three other features, all shot in Ceilândia, the periphery of Brasilia where he is from and lives: Once it was Brasilia, The City is One Only?, and White Out Black In.

Dominga Sotomayor is a film director, writer, and producer born in Santiago de Chile. Her first feature film Thursday till Sunday (2012) was developed at the Cannes Cinéfondation Residence, and won the Tiger Award in the 41º Rotterdam Film Festival. For Too Late To Die Young(2018) she became the first woman to receive the Leopard for Best Direction at 71º Locarno Film Festival. Dominga is also one of the founders of the production company CINESTACIóN and artistic director at CCC, Centro de Cine y Creación, a new arthouse cinema and center in Santiago de Chile.