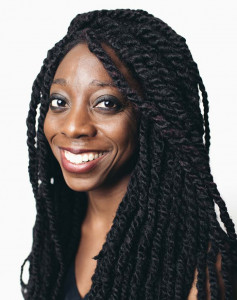 We are thrilled to announce that filmmaker Akosua Adoma Owusu is the 2021-22 recipient of the Gardner FSC Fellowship. A Ghanaian-American filmmaker, Akosua Adoma Owusu mobilizes her split nationality into visually daring and narratively playful films, which viscerally approach issues of race, sexuality, and nationality in the elastic space between her two homelands, Ghana and the U.S. Shooting in 16mm film, Owusu’s work makes urgent the aesthetics and materials of celluloid by bringing into play, on the same ground, the questions sustaining the history of experimental cinema and the questions prompted by her experience dealing with trauma and blackness both in Africa and in the African diaspora. Threading the formally inventive space between essay film, experimental narrative, and Black popular media, Owusu’s films claim a unique place both in the history of the medium and as essential interlocutors in what cinema may have to add to the current negotiation between subject and their image, feminism, queerness, and African identity. We are thrilled to welcome Owusu to the Department of Art, Film, and Visual Studies as a Visiting Lecturer, and to award her the 2021-22 Gardner Fellowship as a demonstration of the importance her work has had for many of us at the Film Study Center.

The Gardner Film Study Center Fellowship was established in 2014 in the name of pioneering filmmaker Robert Gardner, founder of the Film Study Center and faculty member in the Visual and Environmental Studies Department at Harvard University. The fellowship is awarded annually to outstanding filmmakers around the world.