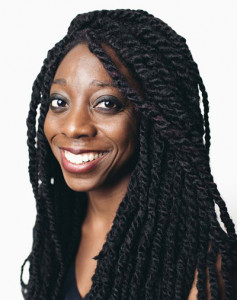 Akosua Adoma Owusu is a filmmaker from Ghana and Virginia. Her films explore the colliding identities of black immigrants in America through multiple forms ranging from cinematic essays to experimental narratives to reconstructed Black popular media. She was a featured artist of the 56th Robert Flaherty Seminar. Owusu’s films have screened internationally in festivals and museums, including the New York Film Festival, Berlinale, International Film Festival Rotterdam, Locarno International Film Festival, Toronto International Film Festival, MoMA, Anthology Film Archives, and the BFI London Film Festival. In 2015, she was named by Indiewire as one of six avant-garde female filmmakers who redefined cinema. Owusu has received numerous fellowships and grants, including the Lincoln Center Award for Emerging Artists (2020), the John Simon Guggenheim Memorial Foundation Fellowship (2015), the MacDowell Colony Fellowship (2013), and the Creative Capital fellowship (2012). She is currently a Visiting Lecturer in the Department of Art, Film and Visual Studies at Harvard University and the Department of Film/Video at the Pratt Institute in Brooklyn, New York.

FSC Project:
With the support of the FSC, she is working on Save the Rex. This feature-length hybrid film weaves together real-life and fictionalized storytelling to explore ideas of individual and collective identity, home, and otherness.