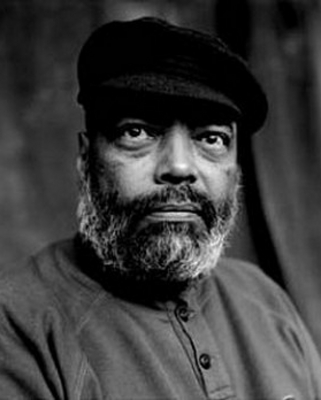 One of Africa’s most acclaimed directors, Abid Mohamed Medonn Hondo was born in Mauritania in 1936. At the age of twenty-five, he left his native Mauritania and went to Marseilles, France, where he worked an assortment of jobs. He later moved to Paris and worked as a cook in one of the city’s grand restaurants.

During his off hours, Hondo took drama courses. In 1966, with African actors, he founded a theatrical company called “Shango,” and featured African playwrights. Hondo began production of his first feature film, Soleil O in 1969.

Praised at the 1970 Cannes Film Festival both for its thematic content and the originality of it formal presentation Soleil Otakes its title from a West African lament about people transported from Africa to be sold as slaves in the Carribean.

Although labeled a “militant” filmmaker, across his career Med Hondo has developed rich and powerful forms of storytelling, drawn from the West African oral tradition of the griots. These are films that frocibly seek to dismantle what the director has called “the narrative and psychological mechanisms of traditional [Hollywood] dramaturgy,” in hopes of raising consciousness. From West Indies, a vast musical fresco covering nearly four-hundred years in the history of the French West Indians, from their enslavement to their present-day displacement in France, to Sarraounia, the valiant story of a West African queen who opposed French colonial troops at the end of the nineteenth century, Hondo has offered up to the viewer impassioned examinations of colonial history and its consequences.