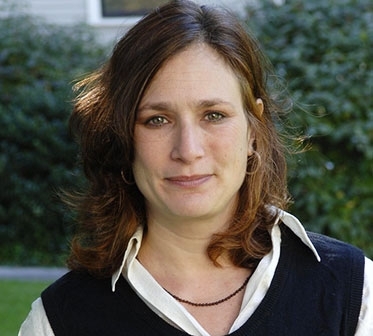 Clea T. Waite’s experimental video works examine the meta-meanings found in unlikely correspondences between myth and science. Her early video works focused on synesthetic assimilations of language, image, and music. In the 1990s, her work shifted to large-scale, multi-channel video installations that explore the corporal perception of time by means of nonlinear montage in space. Her current project, Moonwalk, continues in this structural vein.

While at the Film Study Center and the Radcliffe Institute, Waite will work on Moonwalk, a lyrical history of humanity’s scientific and allegorical relationship with the moon. The film, an investigation in both genre and form, is designed for projection on a planetarium cupola. This format presents an aesthetic and technical challenge to compose a new mode of imagery and time structure.

Waite has exhibited and received prizes at festivals internationally. She has been an artist in residence at the Swiss Museum of Transportation and Communication in Lucerne and the CERN European Organization for Nuclear Research in Geneva and has received fellowships from the Artists in Labs program, the Alexander von Humboldt Foundation, and the National Endowment for the Arts. Waite holds bachelor’s and master’s degrees from the Massachusetts Institute of Technology, where she studied laser physics and creative writing. She did her graduate work in 3D computer graphics at the MIT Media Lab while surreptitiously pursuing filmmaking. Waite recently completed a five-year associate professorship at the Hochschule für Film und Fernsehen “Konrad Wolf,” Babelsberg, in Berlin, where she was chair of the Montage Department in 2003 and 2005-2006.