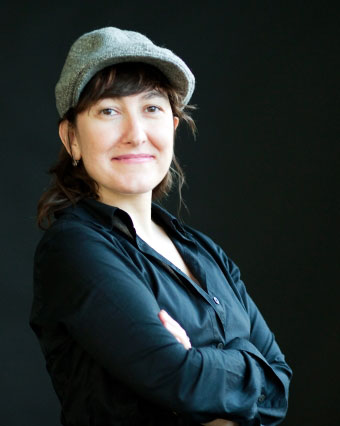 Athina Rachel Tsangari is a film director, writer, actor, and producer whose introduction to cinema came via a small role in Richard Linklater’s film Slacker (1991). She is the director of three short and three feature films along with two episodes of the series Borgia. Her first feature, The Slow Business of Going (2001)—her MFA thesis—is in the Museum of Modern Art’s permanent film collection. In 2004, she founded Haos Film, a filmmaker-run production and post-production studio based in Athens. In 2014–2015, Tsangari was a visiting lecturer on visual and environmental studies at Harvard University.

During her fellowship, Tsangari is completing the script for her sci-fi “screwball tragedy” Duncharon—cowritten with her longtime collaborator and Haos Film partner Matt Johnson—which has already been awarded the ARTE France Cinéma Award for the Best CineMart 2012 Project at the International Film Festival Rotterdam.

Tsangari holds an MA in performance studies from New York University and an MFA in film directing from the University of Texas at Austin. As a student, she cofounded the Cinematexas International Short Film Festival, for which she served as artistic director during its 10-year run. Her short and feature films have appeared internationally at such exhibitions and festivals as dOCUMENTA (13), Sundance Film Festival, Toronto International Film Festival, and Venice Film Festival. She served as projections designer and video director for the opening and closing ceremonies of the 2004 Olympic Games in Athens. Tsangari’s most recent feature, Chevalier (2015), debuted at Festival del Film Locarno.