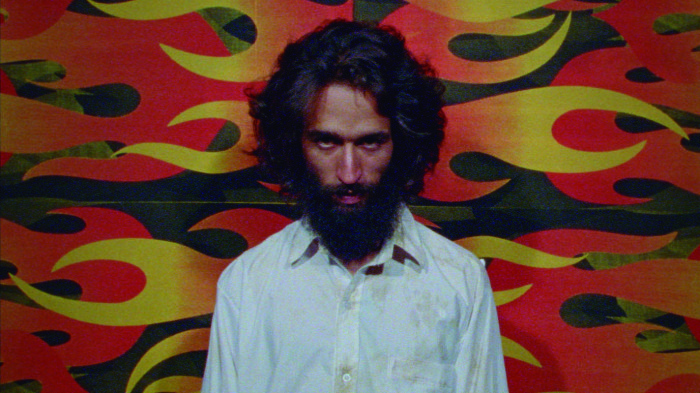 Camilo Restrepo (1975, Colombia) has lived and worked in Paris since 1999. He is a member of L’Abominable, an artist-run film laboratory. His films have been selected in festivals including Toronto and New York and won the Silver Leopard prize at Locarno International Film Festival twice, for his films Impression of a War (2015) and Cilaos (2016).

Pinky is on the run. At night the empty streets smell of the apocalypse and the city seems to be on fire. Narcotics swirl through the veins and the air. Having freed himself from the clutches of a sect led by a certain “padre” and determined to take his fate into his own hands, he is now holed up in an illegal T-shirt factory, surrounded by paints, slogans and heat presses. Pinky is looking for the light at the end of the tunnel, but ghosts are breathing down his neck. He is running for his life, and Colombia is on fire. But Colombia is alive. After his highly promising short films, Camilo Restrepo has now made a debut feature that is as visionary, physical and elastic as the 16mm celluloid on which it was shot. The deeper Los conductos dives into the nightmarish and the hallucinatory, the tougher, more political and hungrier for reality the film becomes. In a narrative downward spiral, it conveys with the utmost precision the survival instincts of a character who is unwittingly fighting to liberate an entire country, perhaps even a continent. Restrepo uses the medium of cinema to transform an allegorical exploration of one’s roots into an irrepressible desire to change the world. – Berlinale Encounters, 70th International Film Festival Berlin