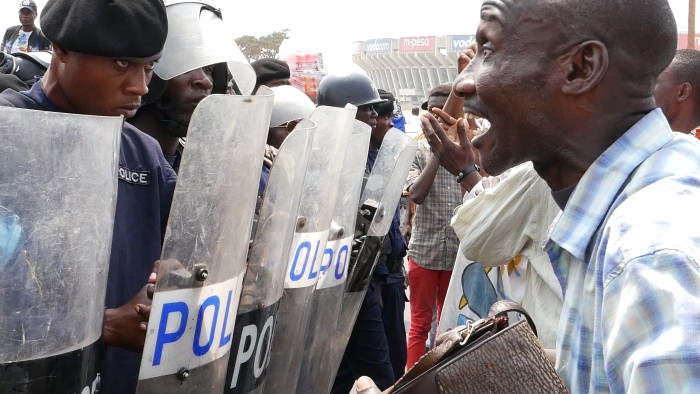 Kinshasa Makambo by Dieudo Hamadi at the HFA

“My country is an open-air prison,” says Dieudo Hamadi. In 2015, the constitution had provided for a least a change of prison warden, but Joseph Kabila, president dictator of the Democratic Republic of Congo, decided to change the constitution. Young people from major cities flood the streets in a protest of unprecedented scale. The film follows three activists in particular: Christian, Ben and Jean-Marie. In an impressive demonstration of physical courage, on par with that of his subjects, Dieudo Hamadi experiences at close range the deadly clashes with police and army, who shoot with real bullets. But he is also embedded in the daily lives of these young people who receive regular threats and criticism from their families and must face the doubts and fears of a situation of extreme violence that seems unlikely to end. Kinshasa Makambo also reveals the internal debates of these protestors as they seek to extend their movement without succumbing to repression and coercion. Closely inscribed within a particular historical and geographical reality, this film—whose director makes the unconditional choice throughout to remain next to his protagonists—also reflects more broadly on the forms of political engagement.

Although they share in the same struggle, the three protagonists do not have the same analysis on how to continue to their fight: one chooses to join an opposition political party, which, in spite of its limitations, represents a possibility of acceding to power; another sticks to his uncompromising opposition to a corrupt system; the third looks to alternative forms of organization for possible answers. Through Hamadi’s lens, these ideas take shape through words, looks and gestures in an intensely vital and moving way.

We hope you will join us for a reception after the screening of “Kinshasa Makambo” on Friday, Oct. 4th.