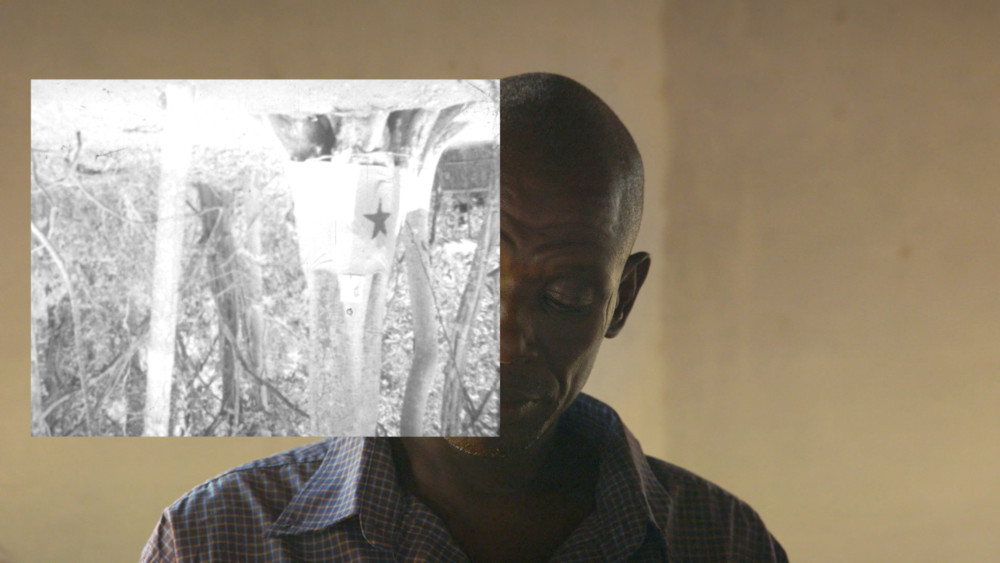 A ghostly moving image of a young man’s face, shot some fifty years earlier, floats on the foliage of night-darkened trees in contemporary Guinea-Bissau. This image appears early in Filipa César’s 2017 film Spell Reel. By turns a political documentary, an archival history, and a lyrical exploration of the relation between past and present, the film organizes itself around a trove of film footage taken during Guinea-Bissau’s war of independence from Portugal (1963-1974). Shot by four young students at the request of revolutionary leader Amílcar Cabral, himself assassinated in 1973, these deteriorating film reels were nearly lost when sixty percent of them were destroyed during the country’s 1998 civil war. In 2012, César began working with the two surviving filmmakers, Flora Gomes and Sana Na N’Hada, as well as Berlin’s Arsenal-Institute for Film and Video Art, to digitize the remaining footage.

These “spell reels,” with their images of rural education, guerilla warfare, and the construction and celebration of a new country, hover over Spell Reel, often literally. Throughout, black and white fragments play over the film’s current-day scenes, capturing rhymes between the present and this irretrievable past. In the film’s contemporary scenes, César and her collaborators create a transnational itinerant cinema, projecting and narrating the footage for crowds across Europe and Guinea-Bissau. As audiences participate, speaking back to the film and their fellow spectators, the “revolutionary films” provide a space for political response—whether in the form of hopeful expressions for Guinea-Bissau’s future, critical assessments of the state of things, or lingering colonial attitudes. In other words these film fragments become, as César calls them, a “visionary prism”—offering a new lens on a world in crisis.

Co-Sponsored with the Harvard Art Museums