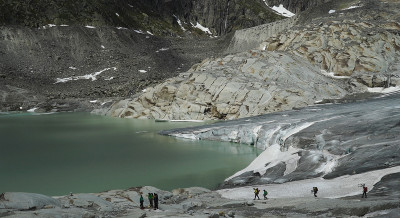 “Slow Return travels up the Rhône, from one end to the other. Between the fishermen of Salin-de-Giraud and the Rhône glacier, Philip Cartelli has numerous encounters and examines the relationship the population maintains with the river. Constructed like a succession of brief episodes, the film composes a sensitive archaeology of the natural environment. Through this compression of time, the filmmaker succeeds in exploring the landscape in all its dimensions. By describing, among other things, the legacies of dependency and cultivation anchored in this natural environment, he reveals its plurality. At once a source of escape, a resource or even a commodity, it is as much subject to human activities as it imposes its own laws. Blending archive images with new technologies, Cartelli also casts a delicate gaze over a time that seems long gone. Such is the threat of the glacier’s possible disappearance. There remains only this inexpressible connection between man and Nature, one of necessity and mystery, which will lead us we know not where.”