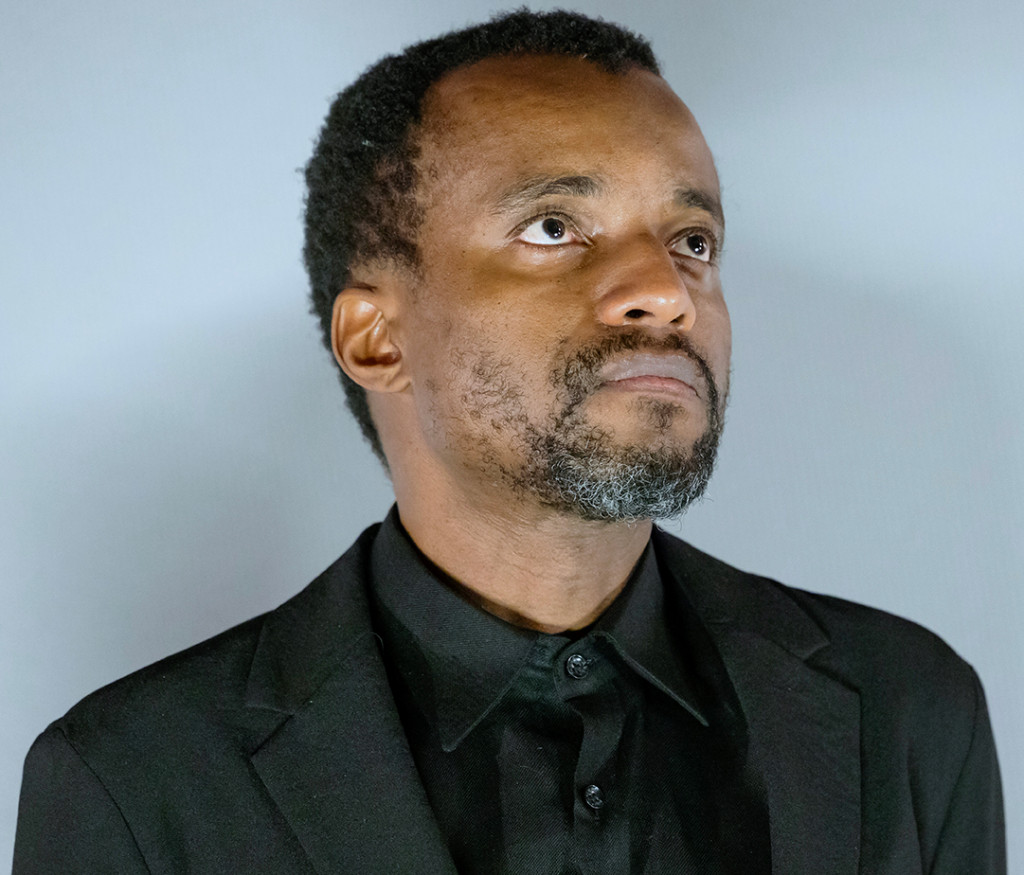 The Film Study Center is pleased to announce that Rwandan filmmaker Kivu Ruhorahoza has been selected as the 2022-23 McMillan-Stewart Fellow in Distinguished Filmmaking. The McMillan-Stewart Fellow is hosted by the Film Study Center in collaboration with the Harvard Film Archive. This year, with additional support from the McMillan-Stewart Foundation, The Hutchins Center for African & African American Research, and the Division of Arts & Humanities, Ruhorahoza will be in residence at the FSC and the Hutchins Center for the entire spring semester with a retrospective of his films screening at the Harvard Film Archive.

Kivu Ruhorahoza is one of the most important filmmakers of the contemporary generation of African filmmakers and, arguably, the single most significant director in the history of Rwandan cinema. He partakes of an African cinema that is in a process of profound renewal, one that is no longer that of the founding fathers and mothers, indeed, a twenty-first century cinema, that is at once confidently globalized and seeks to bring out the specificities of an African experience as well as foreground the possibilities and indispensability of African readings of the contemporary world. Indeed, the richness of his cinematic discourse entails being able to say something about Africa, affirming the right to say something about the world as viewed from Africa, as well as being able to say something about the people who elect to say something about Africa and the world.

This desire to ‘speak’ the world through cinema, and the place of Africa within it, is partly underwritten by the fact that, like most African filmmakers, he was born to find the screens of his country occupied by commercial cinemas from around the world and, thus, soaked in the cinemas of Hollywood, Bollywood, Hong Kong and indeed Europe. Ruhorahoza was 12 years old when, what is arguably the last great trauma on human conscience at the twilight of the twentieth century took place in Rwanda, his country, the Genocide of the Tutsi, a grand narrative of our times that profoundly and surreptitiously informs, resonates and echoes throughout his entire body of work.

As an international multi-award-winning filmmaker and artist, Ruhorahoza has, to date, directed 11 short and feature films which have screened globally at prestigious festivals including FESPACO, Sundance, Berlinale, IDFA, Tribeca, Rotterdam, among many others, while his installations have been featured at the Tate, the Museum of Modern Art (MOMA), and the Institute for Contemporary Art in London among others.

Grey Matter (2011), his first feature, is akin to a manifesto film, which announces several important axes of his cinema including the ghost of the genocide, and reflexivity about and interrogation of the means, stakes, meaning and political economy of cinematic representation. In it, Kivu Ruhorahoza asks the Adornian question: can and should we create after genocide, in a context of national and continental trauma, in the omnipresence of the memory of an open-air genocide? Can and should (film) art exist after genocide? If so, under what conditions? How do we repair trauma after 1994, even of those who were not physically present during its unfortunate unfolding?

The film also offers one of the most cardinal formal propositions of his work; a predilection for a segmentation of his films in parallel structures (often three); part one focusing on a filmmaker struggling to obtain funding and equipment to make a film in Rwanda after the genocide; part two focusing on a madman who may have been part of the perpetrators of the genocide or who reverse psychologically plays the role of the perpetrator in order to cope with the resulting trauma, and part three devoted to two orphans of the genocide, a brother and sister who both lost their parents to the genocide, through rape, murder and the burning of their corpses, with the brother unable to live in the present and finding refuge in a biker helmet, constantly reliving the trauma of his parents’ demise.

One of the refreshing dimensions of Ruhorahoza’s work is that he does not take the work of representation for granted nor does he the means of representations. He seeks to effect a profound reflection upon them, their various dimensions, such as the question of the status of the real, the role of the imaginary, the function of trauma, representational politics, ethics, economics, philosophies, justice, etc. This reflexivity extends beyond the Rwandan post-genocidal context and embraces the very political economy of African cinema, and, indeed, of all cinema as such. What price to pay for a genuinely auteurist cinema? For creative independence more generally?

His next two films, Things of the Aimless Wonderer (2015) and Visual Anthropology and Tourism in the Wake of a Romantic Relationship (2019) (a work still in progress) push further his interests in matters of reflexivity regarding representation, this time focusing on the Western gaze upon Africa. In the first film, set in Rwanda, he ruminates on the possibility of a relationship between Africa and the West, both haunted by ghosts of the past, ghosts of narratives, trauma, violence and violation, and, indeed of history, dating as far back as the primal scene of the continent’s colonial encounter with explorers. In the process, Ruhorahoza wonders whether, in this overdetermined context of Western discursive production on Africa, the aporia of the missionary/savage impulse is at all surmountable and, indeed, whether the possibility of pushing and potentially improving one’s society through the gaze of the Other is at all imaginable.

In the second film, set in in Zanzibar, a touristic space par excellence of the East coast of the African continent, the director gets even bolder formally, by, among other things, adding to the register of camera metaphors in the historical dictionary of the cinema. Indeed, while  Alexandre Astruc, Cahiers du Cinema and the French New Wave gave us the “camera-pen”, while we owe the “camera-gun” to the global decolonization movement, with the figures like Santiago Alvarez, Solanas and Getino, Rocha, Med Hondo and others, we get with Ruhorahoza, the  “camera pen/is”, which, he contends, is a means through which the African continent is constantly being re-penetrated and continuously re-violated through the anthropological/ethnographic regime that underwrites the touristic gaze.

With Europa (2020), his penultimate film, and indeed the logical outcome of the previous two films, Kivu Ruhorahoza now turns to reverse ethnography, by becoming a Rwandan/African cine-ethnographer in contemporary Europe, in Britain, which was its most powerful country in the Age of Empire, but which is currently suffering from a prolonged “postcolonial melancholia” (Gilroy), unable to confront and “work through” its inevitable decline (as is the fate of all empires), and using African and other migrants and asylum seekers as scapegoats deliberately left to rot in dehumanizing bureaucratic machines. The director engages in what may be termed “cine-care” by rendering this situation through the fictional story of a love triangle of infidelity between a white British couple and a Nigerian asylum seeker and setting it against the backdrop of Brexit anti-immigrant passions and debates. He does so by deploying the fictional and essayistic modes of representation in tandem, rendering, in the process, homage to Chris Marker in Sans Soleil (1983), Ousmane Sembene in Black Girl (1966) and Jean-Pierre Bekolo in Aristotle’s Plot (1996). One of the most powerful scenes of the film is the night club scene where the film’s African hero, in the depth of despair, pain and suffering, dances for money, turning on its head the notion in feminist film theory of the male subject as holder of the gaze.

In Father’s Day (2022), his latest film, set in Rwanda, in a COVID-19 context of confinement which, almost by necessity, invites an inward-looking gaze, Kivu Ruhorahoza takes us on an exploration of masculinity through one of its most institutionalized forms: Fatherhood. In the film, he figures Rwandan societal debates around the interrogation of fatherhood in a post-genocidal context, one in which the hands that held the machetes and struck, the voices that aided and abetted, the gestures that betrayed and denounced were primarily those of men. This crisis of confidence in masculinity leads the director to place hopes for the future of the social polity squarely in the hands of women and children. Through three parallel stories of failed masculinity (failure to provide, to assume responsibility, to grieve properly, and the failing of humanity itself by a genocidaire), it falls on wives and daughters to potentially fork the path ahead, to create a new culture of conviviality by helping heal the deep wounds of the psyche engendered by male infamy.

In short, the eclectic cinema of Kivu Ruhorahoza is a cinema of questioning, one that uses interrogation along with critical and vulnerable self-inscription to blaze its own trail, in the hope of pointing to rays of light in the depth of darkness. As the title of his first film announces, this is a “cinema of grey matter,” that of a distinct cinematic voice that will be heard in the years and decades to come. – Dr. Aboubakar Sanogo, Carleton University

The McMillan-Stewart Fellowship in Distinguished Filmmaking was established at the Film Study Center in 1997 with a generous gift from Geneviève McMillan in memory of her late friend, Reba Stewart, to support outstanding filmmakers from Africa or the African diaspora. The endowment provides both a fellowship for the laureate, through which they visit Harvard and share their work with the University community, and also for the purchase of a representative example of the fellow’s oeuvre for preservation in the Harvard Film Archive. The McMillan-Stewart Advisory Committee for 2022-23 is comprised of Mahen Bonetti, Alan Gomis, Haden Guest, Joana Pimenta, and Aboubakar Sanogo.